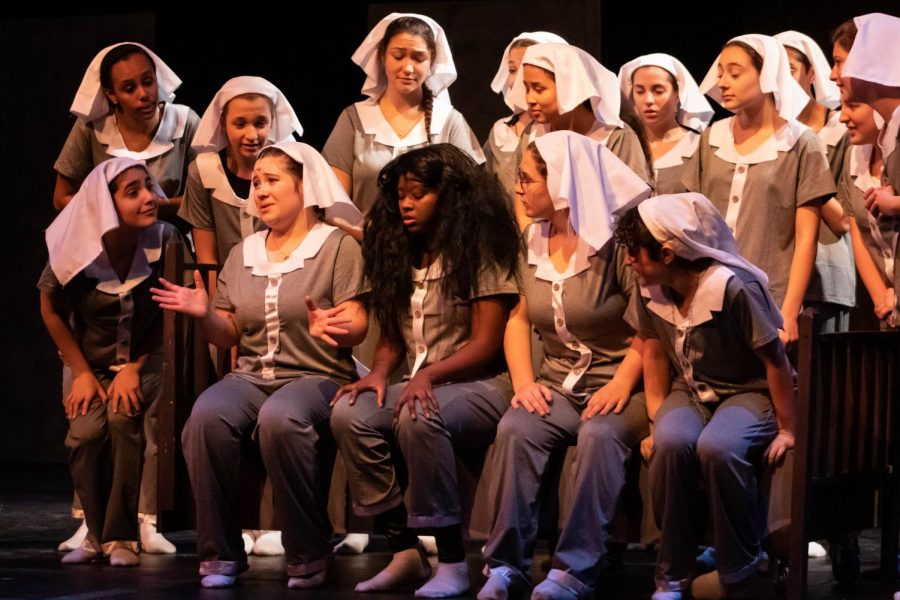 This November, the CRLS visual and performing arts department put on five performances of their anticipated fall musical: Sister Act. The adaptation of the musical comedy, directed by CRLS teacher Monica Murray, showcased all different aspects of CRLS’s creativity and talent and had audience members laughing throughout the show.

The story of Sister Act follows the story of Deloris Van Cartier, an aspiring musician trying to make it in the music industry. However, when she witnesses a murder by her boyfriend, Curtis, Deloris is sent to hide out in a convent and forced to live the restrictive life of a nun. With her ambitious and spirited attitude, she is assigned to be a part of the convent’s choir, where she is able to turn the choir into a dynamic musical group.

Many audience members who hadn’t heard of the plot of Sister Act before were impressed by the musical. Audience member Mia Galante ’21 commented on the success of the show, saying, “I thought it was really funny and well done. It was nothing like I expected, I loved it.”

As successful as the show was, the outcome could not have been achieved without months of hard work. The dedication and persistence put in by the cast was evident to many, especially dance captain Kamali Lopez Kuno ’20, who played Sister Mary Joanne as well as a lounge singer.

the growth of the cast members and their dancing, Kuno responded, “I would say they’re a lot more confident. If you looked at them in the beginning, they were all super shy and relying on Margaret, the choreographer, to do it with us. But now you really see people’s individualities coming through when they perform it, and they have so much more energy than when we began.”

Not only did cast members improve their confidence in expressing their creativity, but they also built a community with others who share the same passion and dedication for the performing arts.

Junior Razan Dareer, who played the lead role of Deloris Van Cartier, touched upon the welcoming environment of the musical that she experienced as a new student at CRLS, commenting, “When I transferred to this school from Doha, [Qatar], I didn’t expect that I would find an artistic outlet that has allowed for a growth in my acting and singing abilities, but also real people who are good in the truest form of the word.”

Despite the stress that comes with balancing schoolwork with the daily commitment of the musical, cast members were quick to express their gratitude for the musical and the strong bond of the community. When asked about her experience doing Sister Act, Dareer remarked, “I’m inconceivably grateful… for the absolute monster that is tech week, because I got to feel and stress it all with people who love each other as much as they love music and theatre.”

Senior Mikael Reyes, who played Pablo, who is one of Curtis’ cronies, added, “There were ups and downs,  but the people that surrounded me made everything worth it. Without them, this process would have been so unbearable, but we’ve built such a strong bond and I’m glad to call my co-stars family.”