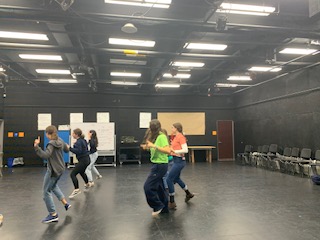 Along with the beginning of school, fall brings the annual CRLS musical. It’s a tradition that brings together the Cambridge community, inspiring future high schoolers to explore their theatrical talents, incorporating the older generations into the happenings at the high school, and of course, allowing the students themselves to appreciate the talents of their classmates.

This year is no different, and the beginning stages of CRLS’ production of Sister Act are already well underway. According to director and CRLS teacher Monica Murray, Sister Act is the story of “A woman who gets into some trouble and the police have to put her in the witness protection program so they hide her in a convent.”

Grace Valaskovic ’21, who portrays a nun in the ensemble, adds, “While she’s in the convent she becomes the choir leader and turns the convent on its head!” This year, unlike in some past fall musicals, there were no cuts during casting, resulting in a cast with more diversity in age and theatrical experience. The cast includes about 45 members, but there are many more people beyond the cast members who make the show happen behind the scenes.

There are various moving parts that fit together to create the final product CRLS community members see on stage. In addition to the actors, there are directors, and stage managers, and there is the tech crew. The stage managers for this production are Sarah Valiante ’21 and Nora Iammarino ’21. “We work entirely backstage helping get the show ready. We sit in on rehearsals, take notes on blocking, take attendance, help lead discussions about character work, integrate technical elements, and make sure things run as smoothly as possible,” says Valiante. “My favorite part of being a stage manager is getting close with the cast and tech and being someone they can trust, and then seeing them on stage doing their thing is so rewarding,” adds Iammarino.

Behind both the construction and the technical aspects of the scenes are the “techies.” Their jobs involve building and moving sets, working the lighting and sound, finding and creating costumes, and acquiring appropriate props to go along with each scene. “It’s a lot of research that goes into it that people don’t realize,” says Anya Cunningham ’20, who is entering her second year as technical director. “We do hours of research design and math to put it all together.”

Being a part of the musical is a significant commitment for everyone involved, in terms of both time and energy. While every individual’s schedule looks different, rehearsals tend to be every day from either 2:45 PM to 6:00 PM or 4:00 PM to 6:00 PM. The demanding schedule becomes even more intense as the performance dates get closer, and rehearsal can run as late as 10 PM as the cast navigates finishing touches.

The show will run on November 15th, 16th, 22nd, 23rd, and 24th. “When you come out you encourage and inspire us to work that much harder,” says senior Ashanti Sturgis, a member of the cast. “In Cambridge, we are so lucky and blessed to have such an arts-supportive curriculum. It’s definitely refreshing and beautiful.”