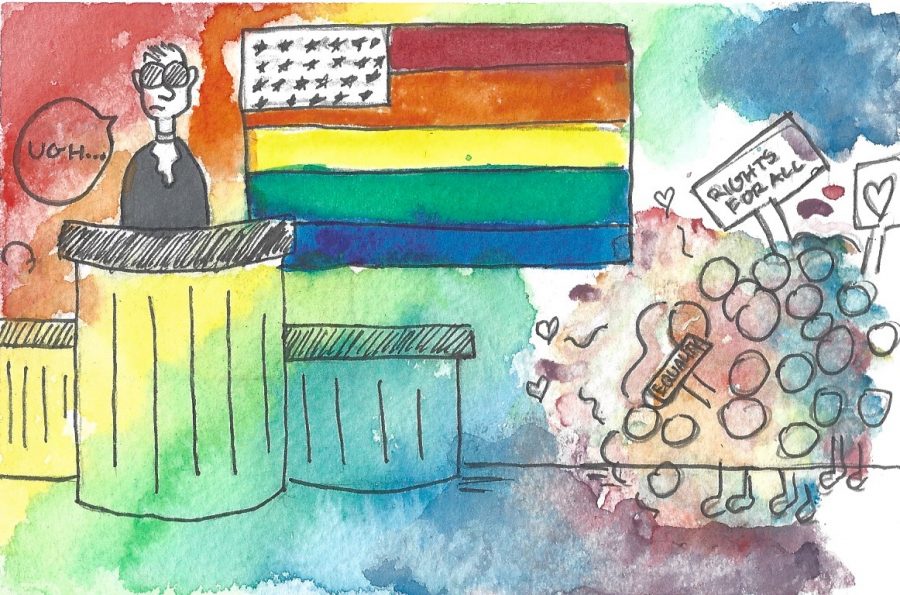 In the past two years, the Supreme Court has gained two more conservative justices.

The United States Supreme Court’s annual term begins this month. Their first case revolves around the question of whether companies have the right to fire people based on their sexual orientation. Five years ago, when the Supreme Court legalized gay marriage nationwide, many thought that the days of discrimination against the LGBTQ community were numbered, yet with a newly conservative court, LGBTQ groups are concerned that the Court will reverse the gains of the past few years.

The Supreme Court will take three cases involving LGBTQ rights and religious freedoms. The civil rights act of 1964, which bars discrimination on the grounds of race, sex, national origin, and religion, does not explicitly mention sexual orientation. LGBTQ groups argue that firing someone for their sexual orientation is discrimination on the grounds of sex, while anti-LGBTQ groups argue that barring companies from firing their employees on the basis of sexual orientation goes against the First Amendement’s protectiions of religious freedoms.

“Discrimination shouldn’t be legal because that’s getting in the way of someone’s happiness,” says Farah Abdullah ’21. “I honestly don’t think it matters who you marry. As long as you are happy, people should just let you be.” Abdullah’s point is consistent with that of many Americans. According to a recent poll by Gallup, 63% of Americans are in support of gay marriage.

Legalizing the discrimination of LGBTQ people in the workplace, says Simone Dobrin ’21, would “be a big step backwards.” She adds, “If people can be discriminated against, it makes them afraid, and makes them feel like they can’t be themselves.” Many of the religious groups arguing in favor of laws that allow employers to fire their employees because of their sexual orientation argue that their religious freedoms are being infringed on with the current state of the law. They believe that the government should not have a say in how an owner operates their business.

Labeeb Alam ’21, believes that morally, there should be no debate on the issue, “I feel like this is just another way of systematically oppressing minority groups. It seems like it’s usually straight white guys making the rules, and this is another case of that. Like many times in the past, it seems like they are trying to dictate how people live their lives all over again,” he said. The departure of Justice Kennedy last year and the addition of Justice Kavanaugh to the Supreme Court gave  conservatives the majority in the Supreme Court. Krish Dhanda ’22 does not feel confident that the court will remain on the side of the LGBTQ community as they have in the past, “I wouldn’t put it past them [to allow this discrimination]. They are living with past ideals in which LGBTQ people are frowned upon.. [luckily] there are large amounts of good people in America, and we’ve seen that during walkouts and protests. I think we’ll react accordingly to the decision and show that this isn’t acceptable.” Both supporters and opposers of the LGBTQ community will be watching closely as the Supreme Court hears their cases in the coming months.